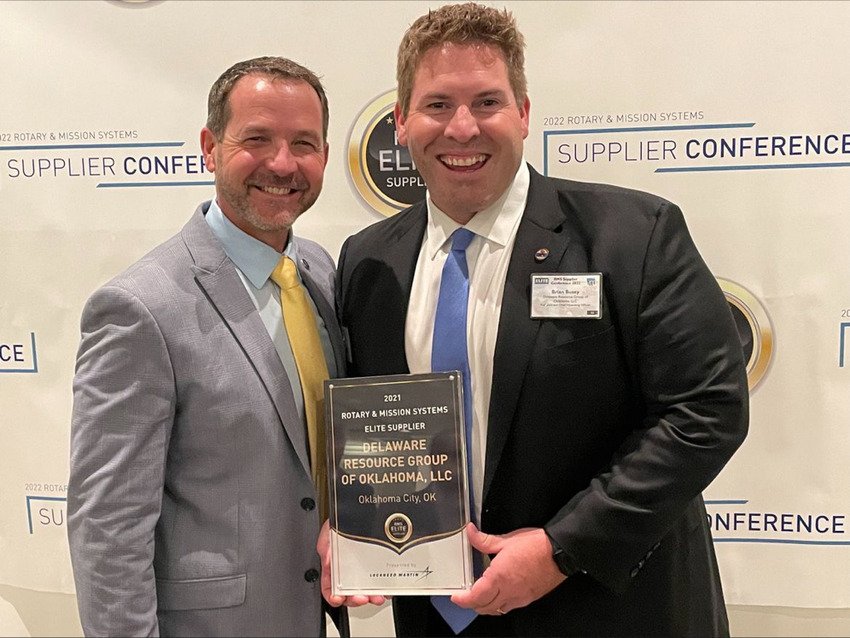 Delaware Resource Group (DRG) of Oklahoma, one of the state’s largest aerospace and defense companies, was recently recognized by Lockheed Martin, one of the nation’s largest defense contractors, for its excellence in quality, performance and on-time delivery.

DRG, a Native American-owned company founded in Oklahoma City and boasting more than 890 employees at over 120 locations in 41 states and 13 foreign nations, received an Elite Supplier Award from Lockheed Martin Rotary and Mission Systems (RMS) during that company’s 2022 Supplier Conference in Florida. DRG was one of just 22 companies selected for the award from among approximately 13,700 suppliers.

“This award truly represents our entire team’s dedication to performance on the multiple programs we support around the world,” said DRG President and CEO Brian Busey in a company news release. “We have a long-standing relationship with Lockheed Martin and look forward to many more years of mutually beneficial success.” DRG is owned and operated by the Busey family.

This isn’t the only recognition DRG received in 2022. Aerospace company Boeing also named DRG as its 2022 Supplier of the Year, becoming the only company in Oklahoma to achieve such status. DRG has also added new efforts to support its customers better. For example, on Nov. 1, it officially began providing operational aircraft maintenance operations, including munitions inspection, refueling service, scheduling and training support services at Sheppard Air Force Base near Wichita Falls, Texas. This last year, DRG has expanded into o-level aircraft maintenance services and enterprise simulator device relocation services.

“We are honored for this tremendous recognition,” said Philip Busey Jr., DRG’s executive vice president and president of commercial entities. “Receiving this award from Lockheed Martin the same year we have been recognized as one of the best suppliers to Boeing is a true testament to our team and the continued hard work supporting our nation’s military – an amazing way to help support the celebration of our 20th year.”